House flipping in New York City has drawn investors who target homeowners in foreclosure as a means of racking up quick profits in gentrifying neighborhoods. Today, the Center is shining a light on how speculative real estate practices in the small home market are depriving New Yorkers of badly needed opportunities to find affordable housing.

Our latest report, “House Flipping In NYC: How Real Estate Speculators Are Targeting New York City’s Most Affordable Neighborhoods,” uses data drawn from a range of sources to identify the impacts of property speculation on homeowners, rents in small buildings, and potential owners struggling to find a home they can afford.

What did we find?

There are new tools to confront this practice that threatens to transform the longtime bastions of affordable homeownership in Southeast Queens, Eastern Brooklyn and parts of the Bronx. New York State Assembly (bill #7406) and Senate (bill #6488) would tax home sales in NYC that occur in rapid succession at higher rates than those that follow long periods of ownership. This flip tax would exempt average homebuyers while demanding the speculative investors pay up if they want to flip in New York City. While this measure, which was included in the New York Assembly’s proposed budget for 2018, would not ban flipping, it would be an important first step in ensuring that home flipping does not dictate who can and can’t own in our neighborhoods.

The report builds on our 2016 study of house flipping in New York City. The 2016 report, “The Impact of Property Flipping on Homeowners and Renters in Small Buildings,” found that flipping has been on the rise as the housing market recovers from the financial crisis and that inflated home prices due to speculation mean fewer opportunities for first-time homebuyers. 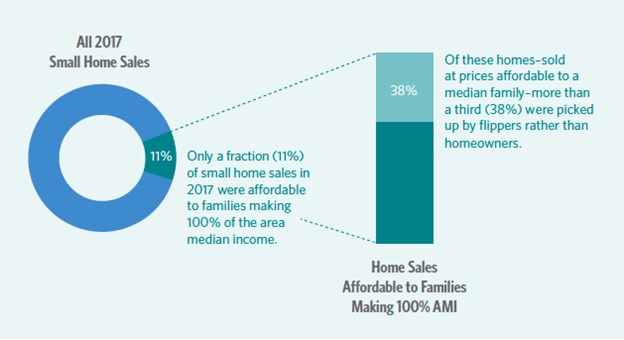