Did you know that since 2010, almost 3,000 New Yorkers have reported being victims of foreclosure rescue scams? And that’s just reported scams — many more homeowners have no doubt been scammed, but did not know how to report it, or were too embarrassed to come forward.

Foreclosure and mortgage scams are a major threat to homeowners across New York. When homeowners are most in need of trustworthy support, they all too often fall victim to scammers and predatory investors who are looking to profit from an environment of fear and misinformation.

Earlier today, the Attorney General announced the launch of a statewide outreach campaign to raise awareness about scams, and the high-quality, free services offered by nonprofits through the Homeowner Protection Program (HOPP).

Gayle Fortunato, a homeowner from Lynbrook, Long Island, joined the Attorney General to share her experience of being scammed by a company in California after she and her husband fell behind on their mortgage. 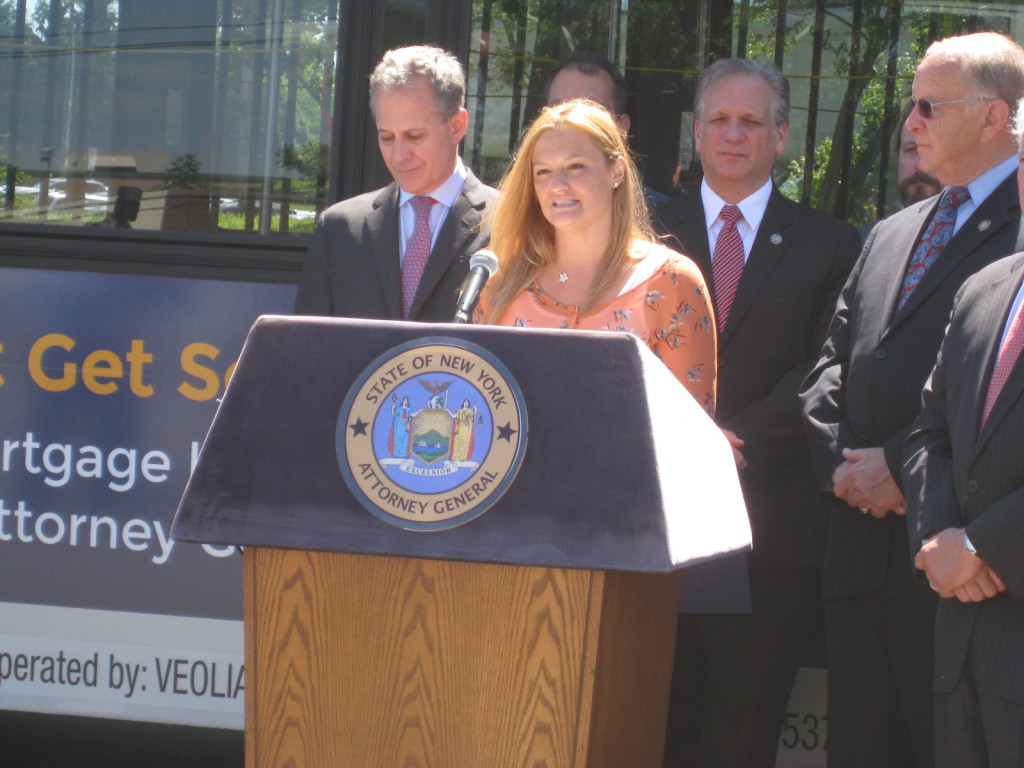 Ms. Fortunato is a young mother of two children who purchased her home on Long Island with her husband in 2010. In 2013, the loss of a tenant and a death in the family caused the Fortunatos to fall behind on their mortgage. The family was inundated with mail purporting to offer help almost immediately after they missed a few mortgage payments. Feeling desperate and scared, they reached out to a large company in California that claimed to have a team of lawyers who could help resolve the Fortunatos’ mortgage issues if they paid the company a few thousand dollars. The Fortunatos paid the fee, sent in their documents, and waited for results, but the family did not receive any help. Later that year they received a foreclosure summons in the mail. The Fortunatos quickly realized that the California lawyers had taken their money without doing anything to help resolve their mortgage issues. They then sought help from a local attorney and were able to resolve their foreclosure. This is an all too common story for many New Yorkers.

Since 2010, New Yorkers have reported over $8 million lost to foreclosure rescue scammers in New York State. The Lawyers’ Committee for Civil Rights Under Law has recorded 2,736 complaints in New York State since 2010, with 355 in Nassau County. Nassau County is one of the top three counties suffering from foreclosures in New York State from 2011 to 2013, with over 8,000 foreclosure filings. Through a concerted outreach effort in Nassau County, including these new bus ads, we hope to increase awareness among homeowners about how prevalent these scams are, and how they can, in fact, get high-quality help for free (!) through the Homeowner Protection Program (HOPP).

To find out whether the organization you are working with is government-vetted, find trustworthy help, or report a scam, visit AGScamHelp.com. To get help with mortgage or foreclosure issues anywhere in New York State, please call 1-855-HOME-456 to reach the Attorney General’s Homeowner Hotline.

And please help us get the word out by sharing the site with your colleagues, friends, and family using #AGScamHelp.