Last month saw three important developments in the world of flood insurance that will have a big impact on New York homeowners: first, New York City has formally appealed FEMA’s proposed flood maps; second, we rallied for proposed New York State legislation to bring justice to victims of Hurricane Sandy who were short-changed by insurance companies; and finally, a new federal rule went into effect regarding escrow payments of flood insurance.

If the City’s appeal is successful, fewer homeowners will be required to purchase flood insurance and the cost of that insurance will be less expensive for many homeowners in the high-risk flood zone.

For more information about the flood map update and the City’s appeal, visit nyc.gov/floodmaps.

2. Alliance for a Just Rebuilding for the Fair Claims Settlement Act

Though Hurricane Sandy wreaked havoc on the tri-state area nearly three years ago, thousands of New Yorkers still grapple with the cost of rebuilding homes ravaged by the storm. Even homeowners who had flood insurance when Sandy struck have continued to struggle with their insurance companies to cover their damages. In fact, after allegations of systematic underpayment of claims, FEMA announced that it would reopen over 140,000 cases.

Unfortunately, protections for New Yorkers against insurers acting in bad faith are not nearly as stringent as those in many other states, including Florida, Texas, and California, among others. Our colleagues from the Center recently joined other advocates on the steps of City Hall to support legislation that would provide compensation to homeowners who have been taken advantage of by insurance companies following disasters like Hurricane Sandy. The event was organized by Alliance for a Just Rebuilding (AJR), a coalition that advocates for equitable and sustainable recovery efforts to assist low-income victims of Hurricane Sandy.

Following Hurricane Sandy, many homeowners did not get the insurance coverage that they had paid for. And even if they were to have taken their insurer to court to get the compensation they were owed, legal fees incurred were often as costly as the settlement they received, discouraging them from pursuing claims. That’s why the Center stands with AJR and New York homeowners in calling on Albany to pass the Fair Claims Settlement Act, which would hold insurance companies accountable for delayed or denied payments to policyholders for legitimate claims.

AJR’s campaign comes at an important time for homeowners living in the floodplain. As the Center has previously written about in its report Rising Tides, Rising Costs, as well as in our blog series, recent changes in federal flood insurance regulations threaten to make homeownership far less affordable for low-, moderate-, and middle-income communities in New York City. We continue to advocate for flood insurance solutions that will promote safety and sustainability, while preserving essential affordable housing that we can’t afford to lose. 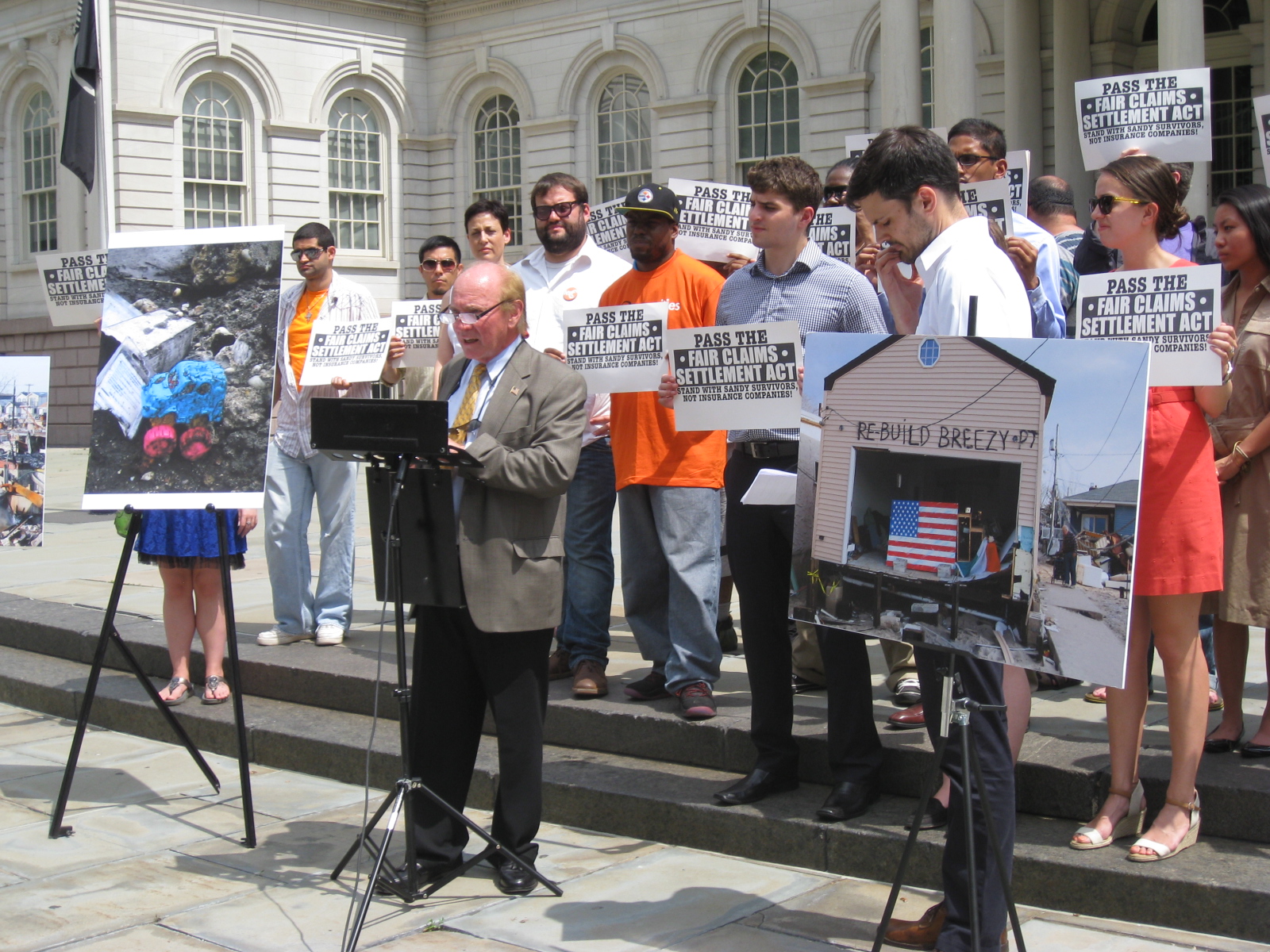 Finally, late last month, federal regulatory agencies adopted a new rule that applies to mortgages on homes located in the high-risk floodplain. The rule implements provisions of the Homeowner Flood Insurance Affordability Act (HFIAA), which Congress passed in 2014, and Biggert-Waters, which was passed in 2012. Among other provisions, the rule requires mortgage servicers to escrow flood insurance premiums and fees for most loans that are made after January 1, 2016. Homeowners covered by this rule will see their flood insurance payments added on top of their regular mortgage payments. Exceptions to the escrow requirement and other details are outlined in the agencies’ full news release concerning the rule. Because the take-up rate on flood insurance is generally low (when Sandy struck New York City in 2012, 33% of properties with a mortgage and 80% of properties without one did not carry flood insurance), this rule could trigger a payment shock for homeowners who were not enrolled in the insurance program.

Additionally, the Biggert-Waters Act increased the maximum civil money penalty that agencies can impose on servicers who violate the flood insurance requirement. This means that servicers will be much more likely to force-place insurance when a homeowner is uninsured. When flood insurance is force-placed, the lender purchase flood insurance on the borrower’s behalf. These new rules clarify that mortgage servicers have the authority to charge a borrower for the cost of force-placed flood insurance coverage as soon as the borrower’s coverage lapses or becomes insufficient. If a lender does this, it may add on fees, which could place greater financial stress on lower- and middle-income borrowers, or worse, lead to mortgage delinquency and foreclosure.

Unfortunately, we have seen similar negative consequences in the past with other forms of force-placed insurance, such as homeowners insurance. Given the potential impact of these changes, it is essential that their introduction is managed carefully, with significant outreach to homeowners regarding the changing requirements.

For more information on understanding flood insurance and your flood risk, visit FloodHelpNY.org. For access to free, high-quality help with flood insurance issues and other assistance for homeowners , call us at 646-786-0888.